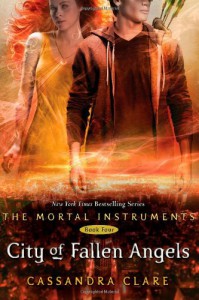 That was a creepy ending... also, I am pretty sure that somewhere on the cover of City of Glass, it said it was a trilogy. No really. You should have seen my face when I went to the library this morning and found books 4 and 5.

I kinda agree with everyone out there who's wondering how long this is going to go on. Cassandra Clare is cool, but I like it when authors write more than one series. (Redwall was awesome, but the Castaways of the Flying Dutchman was even better. Airborn was okay as a trilogy, though, since the other series never interested me.) I have a feeling this is going to be like Warriors... where we're all obsessed and thinking "this is so cool!" but eventually we'll grow up, look back, and say... "A lot of books... kind of dragging the story on... when will Firestar die already..." Well, not really. And that might not happen, just because of the age group and genre. After all, Warriors didn't exactly have just one love story, now did it? So hopefully, we'll move past the whole Clary + Jace & Simon + Isabelle & Alec + Magnus & Maia + Jordan & Jocelyn + Luke & Eric + multiple girlfriends, etc... Also, this story world is just more complete, and as elements of the plot fall in place, it fits with the story world, and Clare doesn't just make up excuses for things happening (except for the whole "Jace is my brother" thing, but that was pretty well explained too).

Okay, rant over. But seriously... I highly doubt that Shadowhunters will ever be as popular as little genius kids in space annihilating aliens.
Tweet